Went for an early start to assure ourselves of a parking space in the resort and as we had enjoyed the skin up the other day decided on the same approach. Got to the top of the lift station in good time and noticed that it was -12. Time for a warming tea and piece of cake before tackling the next bit of climbing. Lots of other people were doing the same thing! Not the climbing.

Although the early part of the skinning track we had put in the other day had been skied over we soon picked it up again on the ridge. Nice to have it to follow rather than put in a fresh track the whole way up. We followed the ridge line up to about 2600m and skied down 150m to where we had stopped the other day before heading back up the slope for more of the same. Was a really fun ski down, the snow was great and only one other person had been down the slope before us. 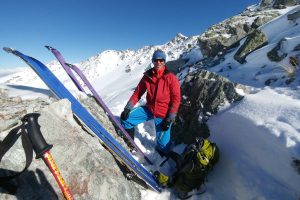 Lunch spot in the rocks

Found an ideal spot for lunch just below where we had headed to the first time round which was sheltered, and had some rocks for us to sit on and enjoy a rest in the sun. I must admit it is much nicer to have a secure platform to take my skins off than feel that I am perched on the side of a steep slope, even when I have dug in!

Another fantastic ski down, put in a set of 8s to match my earlier ski turns which was fun. We were watched down by a group of snowboarders who had traversed round from Greppon to the lower powder slopes so it was nice that we both put in some really good turns and tracks. Ski pride! Really liked the shape of my turns and the consistency in size of turn.

Although tempted we both agreed not to do another loop as after 1400m of ascent our legs were beginning to feel it. Good to finish the day on a high. Also wonderful that even on a busy holiday period we can find fresh powder to enjoy several days after it has snowed if we are prepared to earn our turns.

Thinking about my first turn next to our skinning track 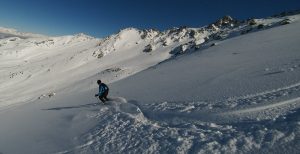